Arrive Jaipur, pick up & drive to Bikaner. On arrival check-in at the hotel. Proceed for sightseeing tour of  Bikaner. Rao Bikaji,  visit the  Junagarh  Fort, constructed between 1588 and 1593 by Raja Jai Singh, a general in the Moghul Emperor Akbar’s army. The city is also called the “Camel Country”. Visit the camel-breeding farm – the only one in Asia. Also, visit the Karni Mata Temple.

Bikaner – founded in 1488 by a  Rathore  Prince,  Rao Bikaji, a descendant of the founder of Jodhpur,  Rao Jodha Ji,  Bikaner has a glorious past to tell. Situated in the north of Rajasthan, the walled city of Bikaner is famous for its sky-touching forts, camel safaris, citadels, and the well-known camel festival. Overnight at Bikaner hotel

Day 02: Bikaner – Jaisalmer
Morning checks out and proceeds to Jaisalmer, the golden city of Rajasthan. In the late afternoon check-in at the hotel. Proceed to Sam for Camel Ride. Return back to the hotel. Stay Overnight at Jaisalmer.
Note:- Tents are closed from Mar to Sep. Only Camel ride is available at an additional cost payable directly.
Day 03: Jaisalmer
After breakfast check out from the Tent(if a stay has taken). Proceed for sightseeing tour of The Golden City – Jaisalmer. Visit the 12th-century magnificent fort at Jaisalmer (This is the highlight of the tour). Also visit the beautifully and magnificently carved Havelis of Salim Singh ki Haveli and Patwon ki Haveli and Gandhi Sagar Tank, followed by a visit to the Barabagh Hill. Return back to the hotel. Overnight stay.
Day 04: Jaisalmer – Jodhpur – Local Sightseeing
After Breakfast & check out from hotel & drive to Jodhpur. Arrive Jodhpur and check-in at the hotel. In the afternoon proceed for a local city sightseeing tour. Jodhpur, a stronghold of the fierce Rathore clan, was founded in 1459 by Prince Jodha. Visit the Mehrangarh Fort, situated on a low sandstone hill. Within the fort, visit Moti Mahal and Phool Mahal. Also visit Jaswant Thada, an imposing marble cenotaph, built in memory of Maharaja Jaswant Singh II around 1899 and Umaid Public gardens. Return back to the hotel and overnight stay.
Day 05: Jodhpur – Jaipur Local Sightseeing
Morning checks out from the hotel and drives back to Jaipur. Proceed for a tour of Jaipur. Jaipur – the capital of Rajasthan was given a color coat of pink a century ago in honor of a visiting Prince and ever since it has retained this color. Built by Maharaja Jai Singh, the notable astronomer, this city is 260 years old. Visit Maharaja’s City Palace, the Observatory & Ram Niwas Gardens. Drive past Hawa Mahal & through the pink rose residential & business areas. Overnight Jaipur.
Day 06: Jaipur Local Sightseeing – Drop
After breakfast, depart for a half-day excursion to Amber Fort (Elephant Ride at an extra cost subject to availability), The Ancient Capital of the state until 1728. Visit the Jagmandir or the Hall of Victory glittering with mirrors, Jai Mahal and Temple of Kali. Ascend on elephant back, the hill, on which the fort is situated. Drop at Jaipur Airport / Rly Stn for onward Journey.
GET A QUICK QUOTE
Just fill in the form here with all necessary details and we will provide you the perfect, tailor-made itinerary at the best possible price, one of our travel experts will contact you shortly. 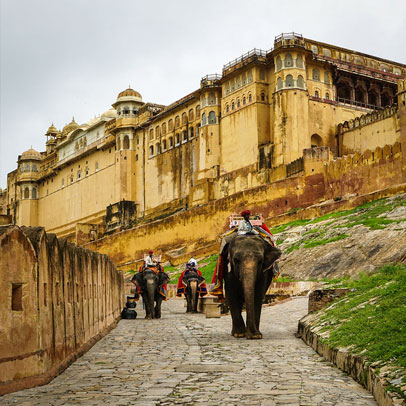 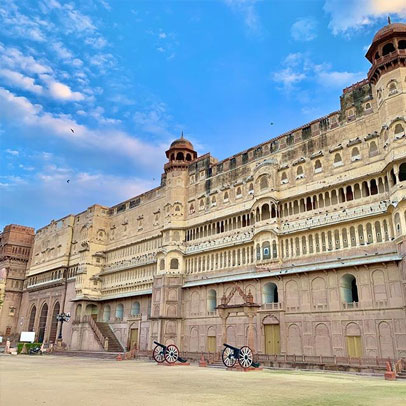 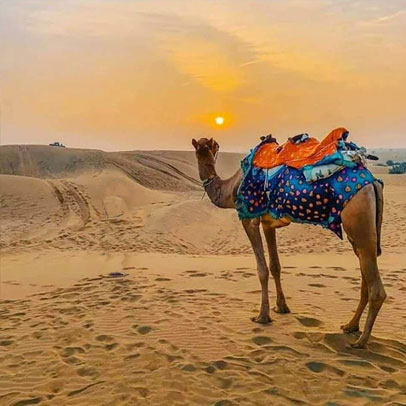